The Cuban Missile Crisis was never reflected on the doomsday clock.   The deadlock had broken before circumstances could be fully determined and the clock reset.  The events of October 1962 brought us closer to the brink than any time in history, before or since.  Seconds to go, to nuclear extinction.

In 1947, members of the Science and Security Board of the Bulletin of Atomic Scientists envisioned a “Doomsday Clock”, a symbolic clock face, to dramatize the threat of global nuclear catastrophe.  Initially set at seven minutes to midnight, the “time” has varied from seventeen minutes ’til with the 1995 collapse of the Soviet Union, to two minutes before midnight with “Operation Ivy”, the first American thermonuclear detonation, in 1952.

The Cuban Missile Crisis was never reflected on the doomsday clock.   The deadlock broke before circumstances could be fully determined and the clock reset.  Yet the events of October 1962 brought us closer to the brink than any time in history, before or since.  Seconds to go, to worldwide nuclear extermination.

All that needs to be known about Cuban Dictator Fulgencio Batista, is that he fled office with $300,000,000 US, on December 31, 1958.  The triumphant rebel columns streaming out of the Sierra Maestra Mountains, were quick to establish themselves in power.  By February 1959, Fidel Castro had installed himself as Prime Minister.

Castro dismissed the need for elections, proclaiming his government to be a “direct democracy”.  The Cuban people could assemble demonstrations and express their democratic will to him personally, he said.  Who needs elections?

“Trials” were carried out across the country, some in sports arenas, in front of thousands of spectators.  Hundreds of Batista supporters were executed or imprisoned as Castro’s “Revolutionary Socialist State” purged itself of the former regime.  When Castro didn’t like the outcome, he’d personally order a retrial.

Earl Smith, former American Ambassador to Cuba, described the Ambassadorship as “the second most important man,” in Cuba.  Now, the Castro administration distanced itself from the US, adopting an increasingly leftist posture and seizing US controlled oil installations, banks and sugar refineries.  By October 1960 the government had “nationalized” 166 such businesses, including Coca Cola and Sears, Roebuck. 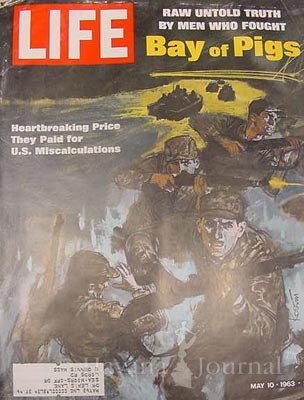 Since the Presidency of James Monroe, US foreign policy has opposed outside intervention in the American hemisphere.  The government was not about to permit a communist state, 90 miles from its shore.

A secret operation to overthrow the Cuban government was conceived and initiated by the Eisenhower administration, and put into motion in April 1961.  1,400 CIA backed Cuban exiles landed on Cuba’s “Playa Girón“ (Bay of Pigs), intending to overthrow the communist government.

The effort was doomed to failure.  The New York Times had been reporting on the “secret invasion”, for a month.

Following the Bay of Pigs fiasco, the Kennedy administration sought other means of removing communists from power.  “Operation Mongoose” sought to embarrass and discredit Castro personally, with tactics ranging from print & radio propaganda, to hallucinogenic chemical-laced cigars.  Someone even had the hare-brained idea of lining Castro’s shoes with thallium salts, to make his beard fall out.

Soviet Premier Nikita Khrushchev concluded from the Bay of Pigs fiasco, that the American President was impotent and indecisive.  One Soviet adviser described Kennedy as “too young, intellectual, not prepared well for decision making in crisis situations… too intelligent and too weak.”

President Kennedy warned of the “gravest consequences” resulting from the introduction of Soviet offensive weapons in Cuba, while Foreign Minister Andrei Gromyko insisted that Soviet aid was purely defensive. U-2 photographs gave lie to Gromyko’s protestations.  Images taken on the 17th revealed the presence of 16-32 missiles.

The administration went to great lengths to portray “business as usual”, while behind the scenes, policy makers wrangled over options from quarantine to tactical air strike to outright military invasion.  President Kennedy himself suddenly departed a political event in Chicago, his aids concocting a “cold” diagnosis to explain his sudden absence.

In a televised speech on October 22, Kennedy publicly revealed the presence of Soviet missiles in Cuba, and called for their removal.  A naval quarantine would close off the island, Kennedy said, until Soviet leaders agreed dismantle missile sites, and to make certain that no additional missiles were shipped to Cuba.

From the Soviet perspective, Cuba was a small ally behind enemy lines, the same situation the Americans experienced, in West Berlin.  Besides, the Americans had missiles in Italy and Turkey.

Kruschev had gambled and lost, that he could “[I]nstall nuclear warheads in Cuba without letting the United States find out they were there until it was too late to do anything about them”.

The President warned “It shall be the policy of this nation to regard any nuclear missile launched from Cuba against any nation in the Western Hemisphere as an attack by the Soviet Union on the United States, requiring a full retaliatory response upon the Soviet Union.”  There was no mistaking American intent.

Kruschev replied, “I hope that the United States Government will display wisdom and renounce the actions pursued by you, which may lead to catastrophic consequences for world peace…”

Soviet nuclear submarines moved in response to the quarantine, as Cuban waters became the scene of a tense, naval standoff.

Kruschev responded on the 24th, describing the US blockade as an act of aggression.  Castro urged the Soviet leader to initiate a nuclear first strike, should the Americans invade his island. The Joint Chiefs of Staff announced a “Defense Readiness Condition” status of DEFCON 3.  The United States Air Force was now ready to mobilize in 15 minutes.

U-2 photographs of the 25th & 26th showed accelerated construction on the island, with several silos approaching operational readiness.  US air forces were placed at DEFCON 2.  War involving Strategic Air Command, was now “imminent”.

On day twelve of the standoff, October 27, an American U-2 was shot out of the sky by a Soviet supplied surface-to-air missile.  The pilot, Major Rudolph Anderson Jr, was posthumously awarded the first Air Force Cross in history, as well as the Air Force Distinguished Service Medal, the Purple Heart, and the Cheney Award.

Anderson’s was the only combat death of the Cuban Missile Crisis, but he wasn’t alone.  Three reconnaissance-variant Stratojets crashed between September 27 and November 11, killing 11 airmen.  Seven more died on October 23, when their C-135B Stratolifter stalled and crashed delivering ammunition to the Naval Base on Guantanamo Bay.

The most dangerous phase of the Cuban Missile Crisis ended on October 28, when Radio Moscow announced that Cuban missiles would be removed in exchange for an American pledge not to invade.  In a secret “side deal”, the Kennedy administration also agreed to remove American “Jupiter” missiles, from Turkey.

The most dangerous thirteen days in world history, had passed.  The American quarantine would continue until November 20, when the Soviets agreed to remove their bombers.  The Americans removed Turkish missiles, the following April.

Throughout this period, a blizzard of communications both direct and indirect, were exchanged between Washington and Moscow.  With little to go on but mutual distrust, Kennedy, Kruschev and their aids sought to understand the true intent of their adversary.

“If there is no intention,” wrote Kruschev, “to doom the world to the catastrophe of thermonuclear war, then let us not only relax the forces pulling on the ends of the rope, let us take measures to untie that knot. We are ready for this.”

The American and Soviet governments established the Washington-Moscow Direct Communications Link in 1963, from a mutual desire that we never again, get that close to the brink.  Contrary to popular culture, this “hotline” has no “red phone”, and never did.  The Moscow–Washington hotline was at first a dedicated teletype, replaced by direct-link fax machine in 1986. Since 2008, the Pentagon maintains a secure computer link with the Russian Federation, and messages are exchanged by email.