Rick Monday was playing Center Field for the Cubs. Describing the “protesters”, Monday said “He got down on his knees, and I could tell he wasn’t throwing holy water on it”. 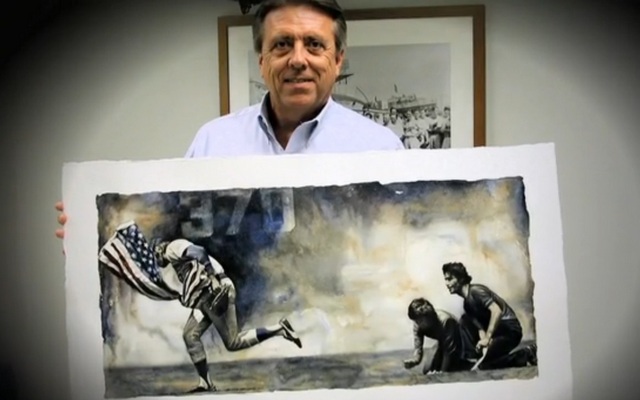 The bottom of the fourth had just started out in Dodger Stadium, when two “protesters” jumped out of the left field bleachers and ran onto the field.

The pair succeeded in soaking an American flag with lighter fluid, but they weren’t quite fast enough with the match.

Rick Monday was playing Center Field for the Cubs.  Describing the scene, Monday said “He got down on his knees, and I could tell he wasn’t throwing holy water on it”.

Monday dashed over and grabbed the flag, to thunderous applause from the 25,167 in attendance. All but two, that is.  By that time. those two were being led off in handcuffs.

When Monday came out to bat in the top of the 5th, he got a standing ovation from Dodger fans, while the message board flashed “RICK MONDAY… YOU MADE A GREAT PLAY…”

The arrested were identified as 37-year old William Errol Thomas, and his eleven year old son. Poor kid.  He’d be 52 now. I wonder how he turned out.

Thomas was convicted of trespassing, and ordered to pay a $60 fine or spend three days in jail. He was unemployed and didn’t have anything better to do, so he took the time. 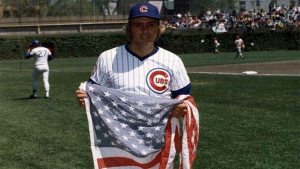 Rick Monday had served a tour in the Marine Corp Reserve, in fulfillment of his ROTC obligation after leaving Arizona State. “If you’re going to burn the flag”, he said, “don’t do it around me. I’ve been to too many veterans’ hospitals and seen too many broken bodies of guys who tried to protect it.”

The flag Rick Monday rescued that day was presented to him nine days later by a Dodgers’ executive, during a pregame ceremony at Wrigley Field. He has been offered up to a million dollars to sell the flag.  As of this date he has declined all offers.

You can see the whole episode at the link below. My favorite part has to be that impotent little temper tantrum at the end, when the protester throws his little lighter at the outfielder’s back. Like a runt possum, hissing at a passing stallion.