Today, (falsely) “Shouting fire in a crowded theater” is a commonly understood limitation on the 1st amendment right to free speech 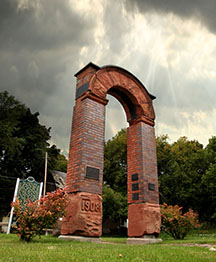 At this time, the Calumet and Hecla Mining Company (“C&H”) was the largest copper mining company in the UP. In July, union members demanded that C&H recognize the WFM as their collective bargaining agent. The company refused to recognize the union, and a strike was called on July 23, 1913.

Five months later, the two sides were still at an impasse. Striking miners and their 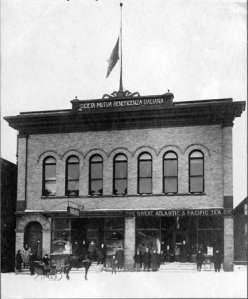 families gathered on Christmas Eve at the “Societa Mutua Beneficenza Italiana”, the Italian Hall in Calumet, Michigan, for a Christmas party sponsored by the Ladies Auxiliary of the WFM.

The party was held in the second floor of the hall, accessible only by a steep stairway, a poorly marked fire escape, and a few ladders propped up against the back of the building. There were over four hundred people in the room when someone yelled “Fire!”  There was no fire, but panicked people rushed for the door. 59 children were crushed or trampled to death in the stampede, along with 14 adults.

In the wake of the catastrophe at Italian Hall, President of the Western Federation of 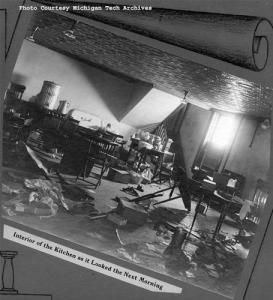 Miners Charles Moyer publicly accused members of the pro management “Citizens Alliance” of responsibility for the disaster. He was subsequently assaulted by members of the Alliance, who shot and kidnapped him, placing him on a train with instructions to leave Michigan and never return. Moyer would later receive medical attention in Chicago, holding a press conference where he displayed his gunshot wound before returning to Michigan and resuming his work with the WFM.

A coroner’s inquest failed to determine who shouted “Fire!” and why, though 8 people testified in a 1914 Congressional investigation, that the man who first raised the cry of “fire” was wearing a Citizens’ Alliance button on his coat, indicating that he was an ally of mine owners.

The first unionized strike in Michigan’s UP had been called in pursuit of shorter work days, higher wages, union recognition, and to maintain family mining groups. Though unsuccessful, ending after nine months with the union being effectively driven out of the Keweenaw Peninsula, it would be a turning point in the history Michigan’s copper country.

Woody Guthrie wrote and performed a song in 1941, called the “1913 Massacre”. (www.youtube.com/watch?v=oz7oguguIZE) In it, Guthrie repeated the claim that the doors were held shut from the outside by management hired thugs. Others have blamed inward opening front doors, which became stuck shut in the crush of bodies, though photographs seem to suggest two sets of doors which open outward.

In 1856, a false cry of “fire” created a stampede at the Royal Surrey Gardens Music Hall of London, killing seven.   Similar disasters followed in Harlem in 1884, and the Shiloh Baptist Church disaster of 1902, when more than 100 people died when “fight” was misunderstood as “fire” in a crowded church.

Today, (falsely) “Shouting fire in a crowded theater” is a commonly understood limitation on the

Italian Hall was demolished in October 1984, leaving only the archway to the front steps, behind which a state historic marker describes the events that took place there on December 24, 1913. Responsibility for the stampede and the 73 deaths resulting from it, has never been determined.